The Royal British Legion were forced to deny that there are any no go zones for poppy sellers in the UK, after a tweet went viral. 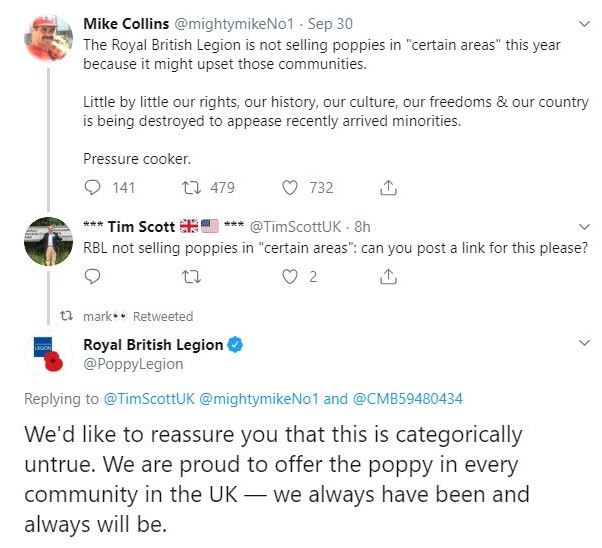 This comes despite numerous attack on Poppy sellers across the UK such as in previous years such as when a group of cadets were approached by a man called Adelso Saws. The cadets said: “This man walked over to us and said ‘I am not buying a poppy, all you do is kill people, I am going to get you shot by terrorists. His girlfriend, who was with him, laughed, then they just walked off. I was offended by what was said.”

The court was told that Saws of Kilburn, Derbyshire, and his girlfriend walked off and the boys reported what had happened to a more senior cadet.

The senior cadet, who was 17 at the time, said he walked over to where Saws was sat in a car. He wound down the window.

“I said to him there must have been a misunderstanding and that the younger cadet seemed quite upset by what he had said,” the teenager told magistrates.

“He said ‘I don’t really care’ and then began telling me that I killed people. I replied that we don’t as we are only cadets and he started to go for the door handle. He said again that I killed people and that he was Muslim.Then the car drove off.”

District Judge Andrew Davison handed him a 20-week prison sentence, suspended for 12 months, and ordered that he pay £200 compensation to both the young cadets.

Judge Davison told Saws: “This was a disturbing and frightening offence towards two young army cadets who were innocently selling poppies.”

Numerous other stories such as minders required for poppy sellers are easily found via search engines and we wish all poppy sellers a safe time this year in the important work that they do.

What has our country come to when young boys and girls selling poppies in support of our armed forces cannot enter certain areas through fear of being attacked by the 'community'?