Whilst every death is tragic we have to look outside of the 'herd' mentality and the English Democrats are 'The 10th Man' in looking outside of the box. 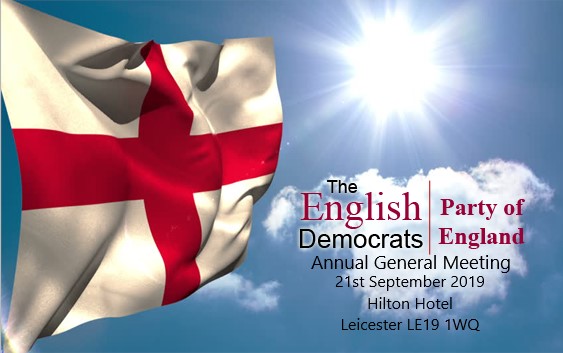 The English Democrats Annual General Meeting is being held on

To book your place email: conference@englishdemocrats.party

WHAT MEDIA BLACKOUT TELLS US ABOUT BREXIT

What emerges from the silence of the main stream media is the deafening sound of an old world disintegrating.

On 2nd April the English Democrats, the English nationalist political party, issued a judicial review claiming the Prime Minister could not lawfully agree to an extension to the period before the United Kingdom could leave the European Union under Article 50 of the Treaty on European Union. The Court is asked to declare that, because she had no such power, the UK automatically left the EU on 29th March – the original ‘exit day’, two years after notification was made.

This challenge was to the extension offered by the EU on 27.3.2019 and accepted by the PM on 28th March not to the additional extension the PM claimed to agree to today (11th April).

Attached are submissions filed in support of the challenge. The Government is expected to reply by 17th April.

The English Democrats’ case is that the PM has no statutory power to agree to an extension. The change to ‘exit day’, in a statutory instrument under the European Union Withdrawal Act 2018, can only be made if the Article 50 period has already been extended under international law. If the PM had no power to extend, Parliament could not lawfully make the statutory instrument.

The English Democrats rely on the Supreme Court decision in Miller v Secretary of State, which found that the government cannot change how and whether EU law applies to the UK by the Royal Prerogative. The PM could only notify under Article 50 under the EU (Notification of Withdrawal) Act 2017. The inevitable result was that the UK would leave the EU after two years, when EU law would cease to apply to the UK. Any extension would change the law by making EU law apply beyond that date, which the Act did not give the PM the power to do.

In addition, the English Democrats’ case (also relying on Miller) is that an agreement to extend the Article 50 period would frustrate the purpose of the 2017 and 2018 Acts; particularly as there is no restriction on the length of any potential extension and the number of extensions that may be requested – as the latest extension has shown.

The ‘Cooper-Letwin’ Act giving Parliament power over extension requests has no effect, as no further extension could be given if the UK had already left the EU by the time it came into law.

The English Democrats rely on the Wightman decision of the European Court of Justice in support of our contention that, under EU law, the PM can only agree to an extension ‘on behalf of the UK’ if she has the constitutional authority to do so. Therefore, the UK left the EU on 29th March under EU as well as UK law.

Solicitor Robin Tilbrook, who is the Chairman of the English Democrats, said that:

“The good news for all those who voted Leave is that we could already be Out of the EU without being saddled with Theresa May’s appallingly bad deal! The challenge to Leave supporters is that this case is our best and maybe our only chance of actually getting out of the EU. This means that we must win it at all costs! I therefore appeal to all Leave supporters to put all differences aside and to unite in supporting this case”

The claim is being crowd-funded and donations can be made here: https://www.englishdemocrats.party/donate

The English Democrats’ Submissions in full have been published here: https://robintilbrook.blogspot.com/2019/04/detailed-submissions-in-re-queen-on.html

Robin Tilbrook, the Chairman of the English Democrats and a Solicitor, has started a case to block the UK Government from extending the Article 50 Notice or revoking it without having to get an Act of Parliament.

What's the SNP playing at over Brexit?

WHAT’S THE SNP PLAYING AT OVER BREXIT?
Ever since its foundation, in 1927, the Scottish National Party has been loudly dedicated to getting Independence for Scotland from the Union of the United Kingdom of Great Britain and Northern Ireland.

During the heady days of Alex Salmond’s leadership it looked as if it might actually achieve that ambition, but with Nicola Sturgeon it would appear that the SNP have lost their way.

Rather like the questioning about why Theresa May was making such a poor job of Brexit (was it incompetence or duplicity?); we now have to ask the same question of Nicola Sturgeon and her leadership of the Scottish National Party about Scottish Independence and Brexit.

On Thursday last week Scottish Nationalist MPs proposed a resolution in the House of Commons to try to trigger Article 50 being revoked and thus to abort Brexit altogether.

This is a strikingly ironic and an apparently irrational thing for national ‘independence’ campaigners to do.  Not only are they trying to use Westminster parliamentary tricks to block the English Nation’s popular vote for independence from the EU, but also they are voting to block Scottish independence also.

During the Scottish Independence referendum, the then head of the European Commission, Mr Barosso, confirmed what numerous other EU figures had been saying, which was that Scotland leaving the UK would make Scotland automatically outside the EU.

It follows that if the UK is kept within the EU Scotland cannot become independent of the UK without leaving the EU.  However, if the UK leaves the EU and Scotland then leaves the UK, Scotland could apply to become an “Accession State” to the EU.

Instead the SNP are now trying to block the UK leaving the EU which shows either a startling degree of incompetence, or that their policy on Scottish independence is mere duplicity.

Here is the BBC report of what Nicola Sturgeon said: -

“Nicola Sturgeon has said she wishes she could turn the clock back and change the Scottish National Party's name.

The SNP leader admitted the word "national" could be "hugely problematic" during a debate at the Edinburgh International Book Festival.

She was speaking with Turkish author Elif Shafak, who said the word had a "negative meaning" to her.

However, the first minister insisted her party was about self government and was not insular.

Ms Shafak, who was wrongly accused of public denigration of Turkishness for her novel The Bastard Of Istanbul, told the audience at the sold-out event: "Coming from Turkey, seeing the experiences there, not only in Turkey, across the Middle East, the Balkans, for us for instance the word nationalism is, for me personally, has a very negative meaning because I've seen how ugly it can get, how destructive it can become, how violent it can become and how it can divide people into imaginary categories and make them lose that cultural coexistence.

"Whereas when I come here, I hear the word nationalism being used in a different way and I felt that, can nationalism ever be benign? Can it ever be a benevolent thing? So, there is a part of me that doubts that very much."

In response, Ms Sturgeon admitted: "The word is difficult."

She said: "If I could turn the clock back, what 90 years, to the establishment of my party, and choose its name all over again, I wouldn't choose the name it has got just now, I would call it something other than the Scottish National Party.

"Now people say why don't you change its name now? Well that would be far too complicated. Because what those of us who do support Scottish independence are all about could not be further removed from some of what you would recognise as nationalism in other parts of the world.

"Two things I believe that I think run so strongly through the Scottish independence movement are firstly that it doesn't matter where you come from, if Scotland is your home and you live here and you feel you have a stake in the country, you are Scottish and you have as much say over the future of the country as I do. And that is a civic, open, inclusive view of the world that is so far removed from what you would rightly fear.

"Secondly one of the great motivators for those of us who support Scottish independence is wanting to have a bigger voice in the world, it's about being outward looking and internationalist, not inward looking and insular.

"So the word is hugely, hugely problematic sometimes for those of us who ...but Scottish independence is about self-government, it's about running your own affairs and making your own mark in the world.

"So yes words do matter but I think we can't change the connotations that the word has in other parts of the world, what we have to do is just demonstrate through words of our own, through deeds, through actions, through how we carry ourselves, that we stand for something completely different to all of that."

Here is a link to the original report>>>https://www.bbc.co.uk/news/uk-scotland-scotland-politics-40975105

So what do you think?  Is the SNP's policy on Brexit incompetent or duplicitous? 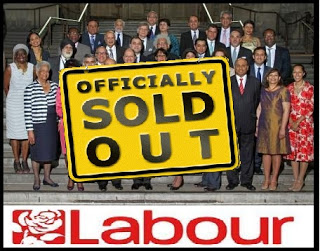 What I have reproduced below is a speech given by the former Labour Cabinet Minister and long-serving MP for Southampton and now Professor at Winchester University in the Centre for English Policy Studies, John Denham.
John Denham is an intelligent and eloquent man, but his politics are highly Labour Party political partisan.
As the speech shows he is fully alive to the risk to the Labour Party’s future of the fact that the English are becoming more nationally self-aware and that English nationalism is awakening.
In the main his analysis is good although his agenda is unattractive to any real English nationalist.  He wants English nationalism to become multi-cultural and therefore in effect cease to be nationalism. The English are to be told in the words of John Prescott “there is no such nationality as English”!
His recipe is really therefore an argument that Labour should be more effectively deceitful about England and the English Nation than they are currently being!
It is a good example of John Denham’s partisan unreliability, lack of objectivity, that despite having met me and quite a few other English Democrats on a number of occasions, he is unwilling to openly admit that there is a campaigning English nationalist party!
It is also deceitful of him to only quote the BBC’s survey which showed many people saying that they are both English and British.  Whereas the much larger and much more authoritative survey, the National Census in 2011, showed that 60.4% of English people identified as only English and not British!
The speech will however, I think, be interesting to anybody who cares at all about England and the English Nation.
Robin Tilbrook
Chairman - English Democrats
Here is what John Denham said:-

This is the text of a talk given to the Young Fabians in Westminster on 8th January 2019.

How British Politics is Failing

HOW BRITISH POLITICS IS FAILING 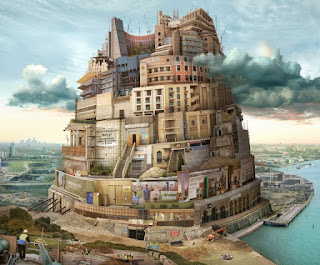 The web based comment blog “Unherd” hosts interesting contributions from politically minded commentators.  The one below is interesting.
It is a recent contribution from Peter Kellner.  Peter Kellner is the Blairite Director of YouGov, the internet based opinion pollsters.  His opinion on the interpretation of statistics is well worth considering.  So when Peter Kellner says:- “I wouldn’t bet a great deal against changes that could be immense, and which not everyone will like”, we should take notice.  Also, as he is an enemy of English Nationalism and he is fearful of the consequences – so that should be encouraging too!
Here is Peter Kellner’s article:-

HOW BRITISH POLITICS IS FAILING