About the English Democrats

Why you should join the English Democrats Party.

The English Democrats are the only political party that is putting the people of England, and the English Nation's interests first!.

The simple answer is never, the people of England are denied the same democratic rights that the people of Scotland, Wales, and N. Ireland enjoy.

This attempt to deny England a voice is clearly evident during the Brexit process, whether you are for 'Remain' or 'Leave' the clear fact is there is no English First Minister, and No English Parliament sticking up for the people of England, our public services, or our businesses. 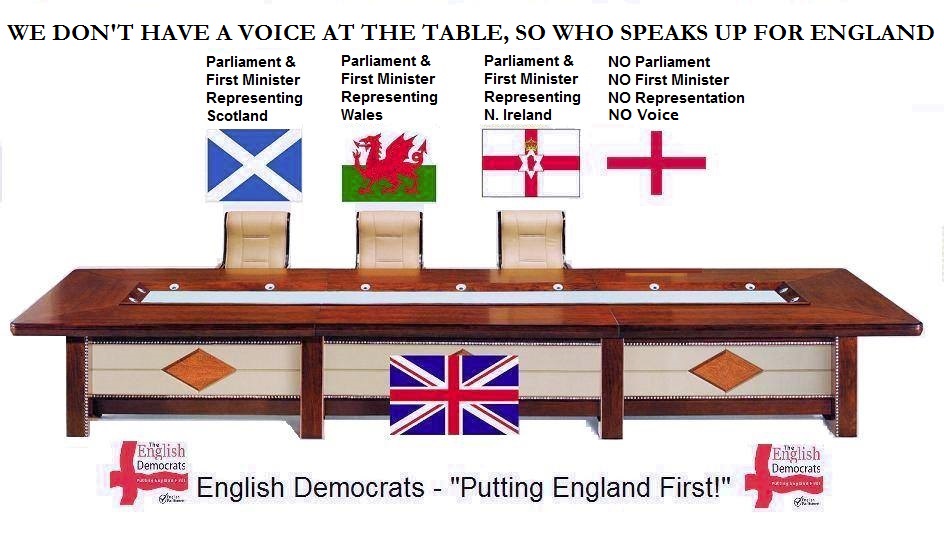 The Conservatives, Labour, Liberal Democrats, Green, and UKIP are “Unionist” in outlook. This means that they see themselves representing the interests of all the three Celtic nations in the UK, even where policies that support Wales, Northern Ireland and Scotland disadvantage England.

They are also trying to break England up into bogus “Regions”. England has over 55 million people, we need our own distinct voice, no Unionist party will put England first – we will and we do!

The launch of the English Democrats Party

The English Democrats Party was launched in 2002 and are the only campaigning English nationalist Party.

We campaign for a referendum for Independence for England; for St George’s Day to be England’s National holiday; for Jerusalem to be England’s National Anthem; to leave properly and fully the EU; for an end to uncontrolled mass immigration; for the Cross of St George to be flown on all public buildings in England; and we supported a YES vote for Scottish Independence.

The English Democrats are England’s answer to the Scottish National Party and to Plaid Cymru.

The English Democrats’ greatest electoral successes to date include:- in the 2004 EU election we had 130,056 votes; winning the Directly Elected Executive Mayoralty of Doncaster Metropolitan Borough Council in 2009 and also the 2012 mayoralty referendum; in the 2009 EU election we gained 279,801 votes after a total EU campaign spend of less than £25,000; we won the 2012 referendum which gave Salford City an Elected Mayor; in 2012 we also saved all our deposits in the Police Commissioner elections and came second in South Yorkshire; and in the 2014 EU election we had 126,024 votes for a total campaign spend of about £40,000 (giving the English Democrats by far the most cost efficient electoral result of any serious Party in the UK!).

In the 2015 General Election we had the 8th largest contingent of candidates in England. In the October 2016 Batley & Spen, Westminster parliamentary, By-election we came second and easily beat all three British national parties.

In the 2017 Greater Manchester Mayoral election we came 5th beating UKIP and beat the Greens in all but 2 boroughs.

In the 2018 South Yorkshire Mayoral election we had 14,547 votes and saved our deposit and with a minimal campaign budget achieving 12.8% of the First Preference votes in Doncaster.