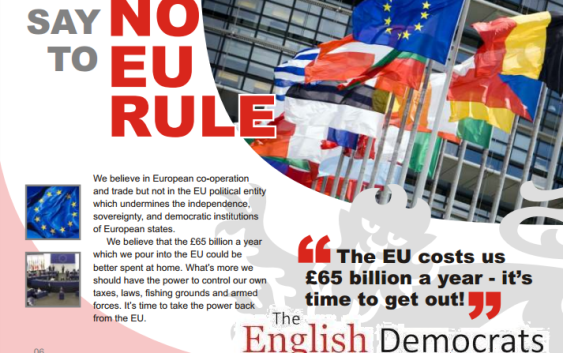 N.B. Our manifesto can only be changed by the membership of our party at our annual conference, as such sections relating to the European Union and any referendum will be updated shortly.

3.9.1 The English Democrats favour European co-operation and trade but not a European political entity which undermines the independence, sovereignty, and democratic institutions of European states.

3.9.2 European integration, as conceived by the Frenchman Jean Monnet, had the aim of tying Germany into a network of political and economic links with France and other European states so that it would be impossible for Germany to go to war with them. That was by no means the only motivation for seeking ever-closer political and economic union. The interests of Germany and France came together in the peculiar circumstances following World War II. Advantage could be gained for both by combining a post-war German economic revival with French political and agricultural dominance. Germany gained a secure market for its manufacturing industry and France gained a protected market and financial support for its agriculture. In addition, France obtained privileged access to the European market for its colonial produce, and took the lead in building European institutions on the French model – centralised and bureaucratic. The aim from the beginning was to enmesh the states of Europe in an economic, political and military union from which they could not break free. That goal was, and still is, considered more important than the democratic nicety of explaining the goal to the electorate and seeking its approval.

3.9.3 The states of the EU cannot be successfully run as either an economic or social whole. Their economic and cultural circumstances are very different. Each needs to be governed in a way which accords not only with material needs but also with the democratic, cultural and other traditions of the indigenous nations. The one-size-fits-all approach of EU institutions is a recipe for disaster.

3.9.5 The EU has become a top heavy and outdated bureaucratic hulk which is unsuited to an age when the people of Europe need democratic nation-states to protect them and their unique cultures from the excesses of global corporations, global institutions and the global economy. The EU is a part of the problem, not the solution.

3.9.6 (To be amended) The English Democrats will seek referendum authorisation to decide this country’s future relationship with the E.U. That referendum should include the option of leaving the EU and joining the European Free Trade Association, EFTA, whose countries have a free trade agreement with the EU.

3.9.7 (To be Amended) The English Democrats believe that this country should leave the EU and will campaign forcefully to that end.

3.9.9 If England votes to leave then all payments to the EU should cease forthwith and England should re-assert its own sovereignty vis-à-vis the EU. This would involve taking back powers that have been ceded and our own territorial waters.

3.9.10 (To be amended) On leaving the EU, we would hope and expect that the other UK nations would likewise leave in order to preserve a cohesive British state and avoid unnecessary division. In the event of one or more of the other UK nations preferring to remain in the EU – then England should leave the EU nonetheless, unilaterally if necessary.