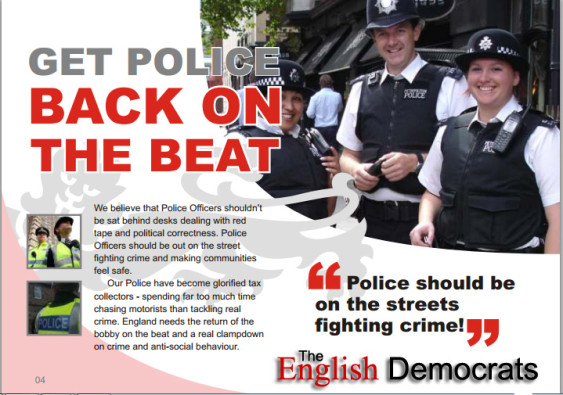 2.11.1 Policing is an increasingly difficult job due to changes in our society, which now lacks the social cohesion and shared values that once gave us a mostly peaceful and well-ordered way of life. Our cities have become places where it is impossible to perform traditional communal policing. 2.11.2 English Democrats seek a return to a system of policing which recognises the principle that all citizens are treated equally. In their efforts to prevent crime and catch criminals the police should not be hindered and demoralised by unreasonable ideological constraints. 2.11.3 We should not lose sight of the fact that the basis for the maintenance of law and order in England rests on a firm foundation of active participation by law-abiding citizens. A relationship of trust and co-operation between citizens and police is essential to effective policing and the prevention of crime. With that in mind, it is reasonable to expect that policing should not be oppressive. The aim is a peaceable society in which liberty and justice can flourish. 2.11.4 It is essential that the police force be adequately trained and resourced. 2.11.5 Police forces should be more democratically accountable than at present. This would require the election of Chief Constables or the Police Authorities which appoint them. 2.11.6 English Democrats call for the creation of a scheme enabling businesses to pay for their security staff to train and register as Special Constables, their powers of arrest applying to their place of work and its neighbouring streets. Such registered security staff would be subject to Police staff performance monitoring and discipline.