May will block Boris' No Deal Brexit

Traitorous Theresa is at it again. Sabotaging our negotiations did not work, so, now May has vowed to block any chances of Boris Johnson achieving a No Deal Brexit by joining forces with her Remainer pals.

Allies of Mrs May revealed she also voted for Remainer Rory Stewart in Thursday's ballots - which Mr Johnson won by a landslide.

Mrs May has reportedly suggested forming alliances with the Chancellor and Pensions Secretary to thwart Mr Johnson's attempts to have the UK leave with no deal after the October 31 deadline. 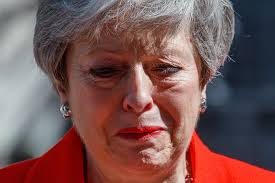 Mr Johnson's landslide victory means his opponents are being forced to decide to jump on his bandwagon or continue to fight him in the race to Downing Street.

Despite Mrs May failing to secure the Commons' backing on her Brexit Deal and ultimately leading to her downfall, she is hell-bent on ensuring the UK does not leave the EU without a deal.

She said she will stay as an MP for Maidenhead after she leaving No10 next month.

An insider told the Mail On Sunday: "She made little secret of the fact that she did not want Boris to succeed her, and if you study everything she has said it is clear where she now is on No Deal.

"The best hope is that Boris is bluffing as usual."

Her allies also believe she voted for Mr Stewart to "keep the race interesting" amid claims she was supporting Foreign Secretary Jeremy Hunt.

Mr Stewart has said he wouldn't change much about the PM's Withdrawal Agreement - which was rejected three times in the Commons - and was one of her biggest defenders of her deal.