In a stunning find, the largest concentration of apotropaic graffiti, or ‘witch marks’, in the UK has been identified in the caves at Creswell Crags, between Nottinghamshire and Derbyshire.

This site is famous for its Palaeolithic cave art, a rarity in Britain, and hundreds of tours have passed through the complex to glimpse the Ice Age imagery. All of these groups will have walked past the mass of modern carvings that were etched into the cave walls before access to Creswell Crags was restricted – but it was only recently that two visitors to the caves, Hayley Clark and Ed Waters from the Subterranea Britannica group, realised that these more recent markings might not just be run-of-the-mill graffiti. The dense concentrations of letters inscribed on the walls were more than the initials of earlier visitors: some seem to have been intended to fend off evil spirits.

Many of the engravings are double Vs, a common motif believed to refer to the Virgo Virginum (Mary, Virgin of Virgins), and PMs, believed to stand for Pace Maria, another invocation of the mother of Christ. There are also abstract designs that were thought to trap ‘evil’, including diagonal lines, boxes, and mazes.

The sheer number and variety of the marks is believed to be unprecedented in Britain. Previously, the largest number of witch marks was found in caves in Somerset, where 57 marks have been recorded. The number at Creswell Crags, though, far surpasses that, with hundreds in one cave alone. 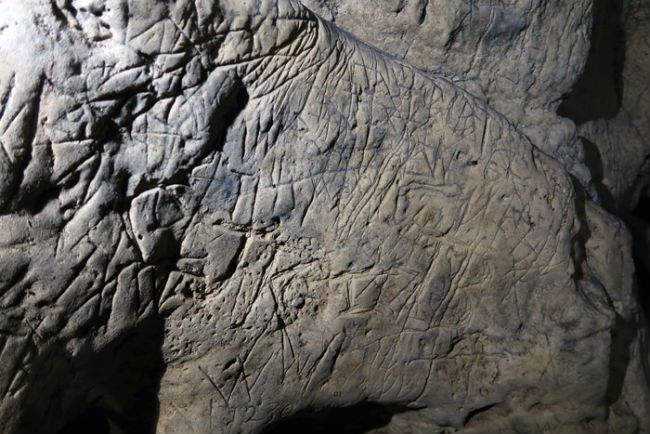 Tim Allen, Inspector of Ancient Monuments at Historic England, said: ‘There’s such a concentration of marks at the back of Robin Hood’s cave as compared to the general density of inscribed letters of all sorts in the gorge. This space had stories, narratives – by making apotropaic marks and inscribing their initials, people were engaging with both. One can imagine these tales changing over time and people arguing over their truth. Up to the 19th century, there was a small hamlet at the end of the gorge: the dark depths of the caves may have featured large in lives led at that time.’

Creswell Crags is already of international importance for its Ice Age art and ancient remains – to find this huge number of protection marks from the more recent past adds a whole new layer of discovery.