Boris reduced to Majority of 1 in Parliament

Boris Johnson's conservative/DUP government has been reduced to a working majority of just one in Parliament after the liberal democrats out polled both Labour and Tories in the latest bi-election.

The Liberal Democrats have won the Brecon and Radnorshire by-election after a Conservative MP was recalled by voters following an expenses scandal – and then re-selected by the Tories. 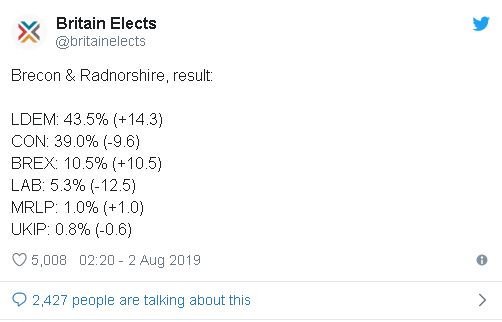 Chris Davies lost the seat last night, securing 39% of the vote with the LibDem candidate Jane Dodds winning with 43%.

Despite being squeezed by the Boris Johnson honeymoon period, the Brexit Party scored 10% of the vote with Labour nowhere with 5%.

It is clear that Labour voters are defecting on droves to the anti-Brexit, pro-2nd referendum Liberal Democrats. Corbyn's grip on Labour is becoming more tenuous by the day.