Boris Johnson also asked the EU to ‘make clear’ that another extension beyond 31 January will not be granted if MPs fail to back his call for a December election.

“As you are well aware, I have no discretion under the UK’s European Union (Withdrawal) (No.2) Act 2019, which was imposed on this Government against its will, to do anything other than confirm the UK’s formal agreement to this extension, as per the attached draft Decision. 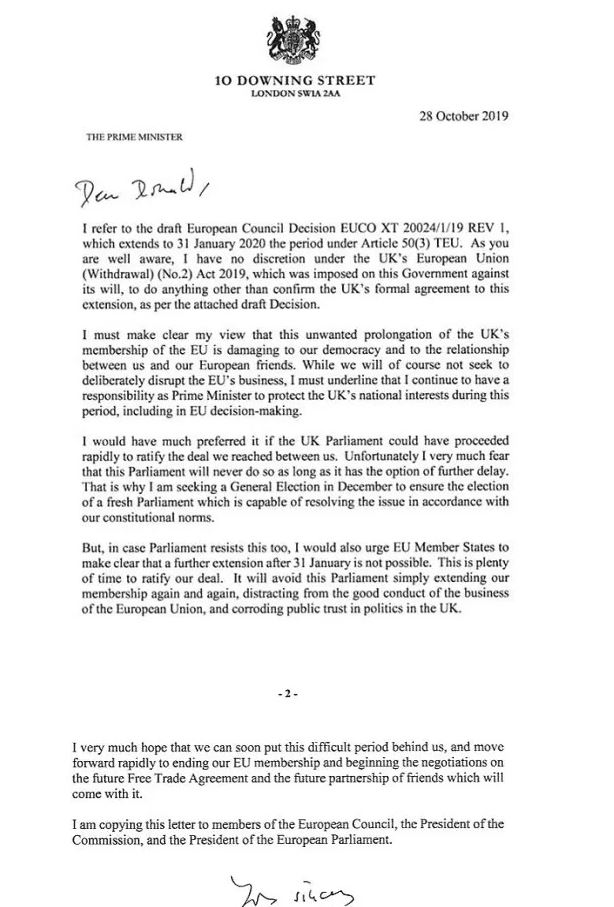 I must make clear my view that this unwanted prolongation of the UK’s membership of the EU is damaging to our democracy and to the relationship between us and our European friends. While we will of course not seek to deliberately disrupt the EU’s business, I must underline that I continue to have a responsibility as Prime Minister to protect the UK’s national interests during this period, including in EU decision-making.  I would have much preferred it if the UK Parliament could have proceeded rapidly to ratify the deal we reached between us.

Unfortunately I very much fear that this Parliament will never do so as long as it has the option of further delay. That is why I am seeking a General Election in December to ensure the election of a fresh Parliament which is capable of resolving the issue in accordance with our constitutional norms.”