Speaking to Express.co.uk, Mr Tilbrook said: “We have a very strong legal argument - I’m 80-90 percent confident we will be successful.

“Government lawyers have tried to rubbish our case, but I’ve not had any legal professional tell me we haven’t got an excellent chance of succeeding.

“Theresa May and her Government had no right to agree an extension to Brexit.

“We should have left the EU as proposed on March 29, and if we win this case, we will finally be out of the bloc.”

Commenting on the specifics of the case, Mr Tilbrook added: “The notice was served and expired, so it means you are out.

“The Government served their notice under that Act of Parliament and if you look at the Act in question, it’s extremely short at 137 words.

“That only states the Prime Minister only had the power to serve notice to withdraw the UK from the EU, and nothing else.”

But Government lawyers have since hit back, claiming Mr Tilbrook’s case is “totally without merit”. 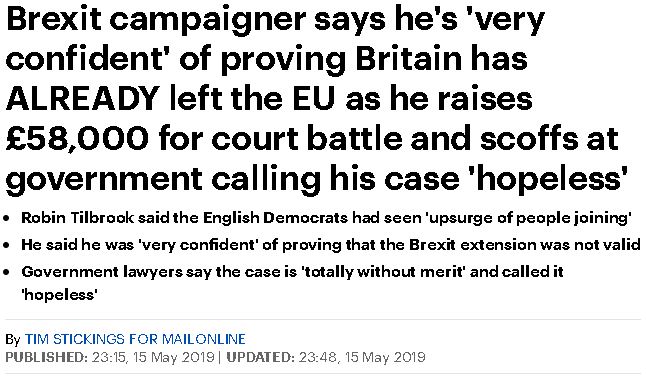 The leader of the English Democrats has said he is 'very confident' of proving that Britain has already left the EU - despite government claims that his case is 'hopeless'.

Robin Tilbrook said his movement had raised £58,000 for the High Court battle and enjoyed an 'upsurge of people joining our party'.

The pro-Brexit campaigner vowed to press ahead with the legal challenge despite government lawyers calling his case 'totally without merit' and trying to have it thrown out.

He said officials were just as dismissive of the Gina Miller case in 2016 - a case which she went on to win.

The case turns on whether Theresa May had the legal power to delay Brexit past the initial March 29 deadline.

Mr Tilbrook says she had the power to start the two-year withdrawal process, but not to amend it.

As a result, he says the extension was invalid and that Britain left the EU on March 29 as originally planned.

The only way out of the EU straight jacket is through our high court case against the government. The Conservative media has finally caught on to this. Casting your vote for the Brexit party this Thursday will not bring Brexit any closer. Get behind The English Democrats and support us in our struggle against the corrupt anti-Brexit establishment.