Well, we cannot say we are shocked...

The Labour Party under Jeremy Corbyn’s leadership has been blighted by allegations of anti-Semitism since 2015. Mr Corbyn has always strongly denied being an anti-Semite. However, footage has emerged on Twitter from January 2009 that appears to show Jeremy Corbyn firmly in attendance at an anti-Israel demo in Birmingham which was “for all intents and purposes an antisemitic hate rally”.

A recurring theme from Mr Corbyn’s leadership of the Labour party has been his links with the IRA, his hosting of Hamas as Hezbollah in Parliament as well as Anti-Semitism, and this footage will only add fuel to that fire.

Photographic evidence puts Mr Corbyn right at the front of this event just behind a banner with ‘Gaza 21st century concentration camp’ written on it. Mr Corbyn has seemingly never attempted to hide his support for the state of Palestine. 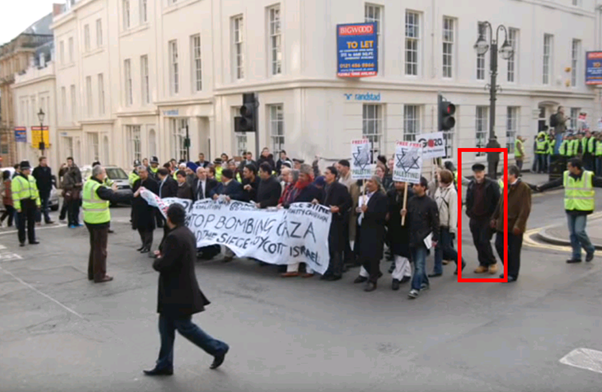 The origins of the far-left’s support for Palestine appears to comes from a loathing of Israel and accusations of capitalist conspiracy theories, and in some extreme cases holocaust denial.
Links to this were also found at this event in Birmingham. A banner showing Ehud Olmert the former Israeli Prime Minister, Mark Regev Israel’s current ambassador to the UK along with Goebbels and Hitler with the words ‘history repeats itself’. Following Mr Corbyn’s election in 2015, he told the BBC “I want a kinder politics” and an end to “personal abuse”. Many will see him being visibly present and involved in these events as in clear juxtaposition to these words.
Picture footage provided by @TheGolem on Twitter was captioned with “Much of the imagery and language from the day invoked the antisemitic blood libel including placards which read ‘Israel is thirsty for blood’ and ‘free Palestine from child killers’”. One picture shows a masked person with Israel on its forehead eating the arm of a child. Also, in this picture, a ‘the socialist worker’ plaque can be seen.
-->