The Daily Express has boasted to the Guardian about appointing a Europhile, Gary Jones, as its new editor, turning one of Britain’s only Brexit-supporting newspapers into an increasingly watered down, pro-mass migration outlet.

The Guardian gloated that the formerly populist newspaper, once “associated with… a relentless campaign for Britain to leave the EU”, has now been thoroughly neutered by its Remainer editor.

Jones “seems to have recanted most things his newspaper stood for”, the Guardian cheered, describing him as a “lifelong Labour supporter [who] wants to promote the positive impact migration has on the UK and has pledged to do all [he] can to fight Islamophobia”.

“The Express was undoubtedly anti-immigrant, despite the fact that without immigration we would not have a National Health Service,” Jones alleged, bragging that, on his very first morning at his new job, he told staff: “I’m not going to be doing an anti-immigrant story. Ever. Do not put them on the schedule.” 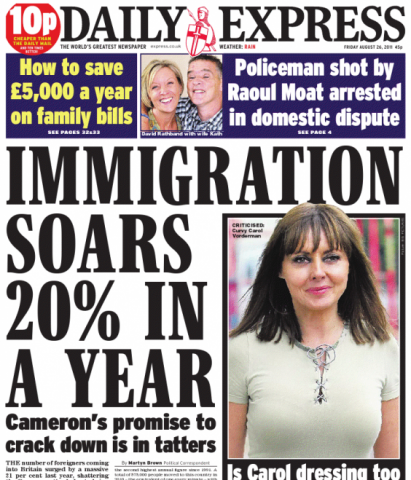 According to Jones, he “couldn’t sleep” after seeing a collage of previous Express front pages which featured stories highlighting some of the negatives of mass migration and lax border controls, or which exposed the scale of immigration to Britain.

Amongst the often-alleged to be “offensive” front pages put out by the Express, which Jones characterised as dealing in “brutality”, were headline stories titled ‘Britain opens door to asylum seekers’, ‘Immigration soars 20% in a year’, and ‘Britain’s 40% surge in ethnic numbers’.

“People had collated every front page which was anti-immigrant. It was certainly Islamophobic,” Jones claimed.

“This was not representative of the kind of society I think we should be,” he complained, before going on to talk of the public’s reaction to his transformation of the publication.

The Express readership were “a compassionate, traditional people” who “were just led down a path” and “reminded me of my parents”, claimed the former Sunday Mirror editor, who suggested that he came from a “lower-middle class background”.

However, Jones was keen to stress that the “Conservative-supporting”, Express-reading instincts of his parents had not been passed down to his own left-liberal son — who the journalist sent to Eton College boarding school to enjoy an elite and expensive private education, in order to “confront the establishment and authority and to try to have a say, but to be authentic.”

The takeover of the Express by Reach/Trinity Mirror — which helped found the far-left “anti-fascist” HOPE not Hate outfit — was greenlighted by the British government last June.

The Daily Mail, another formerly right-leaning, pro-Brexit newspaper, has also been taken over by a Remainer since the EU referendum in 2016, in the person of former Mail on Sunday editor Geordie Greig.