Loudmouth Labour MP David Lammy said that Brexit could spark constitutional outrage that could lead to civil disobedience, the politician has also claimed he would be an active participant in any civil disobedience.

The message from Mr Lammy comes as it was reported in the Guardian that the Prime Minister is seeking legal advice on the possibility of closing Parliament to block any delay in leaving the European Union.

Mr Lammy took to Twitter, posting to his 541k followers he said: “This constitutional outrage will spark civil disobedience and I for one will actively participate.” 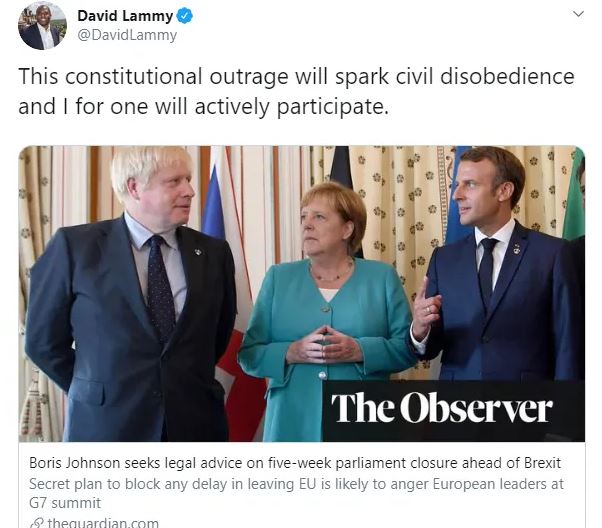 Twitter users flooded to the comments section to give air their opinions, one user named Bill Rollinson said: “But he’s doing it to deliver the peoples wishes of a democratically voted referendum result. Currently being stopped by crooked MPs’.”

Other users including one named Mrs B urged Mr Lammy to consider what he was saying he is willing to do, they wrote: “So you are planning to overturn a democratic decision by civil disobedience. There lies a very dangerous path, you need to think very carefully about what you are saying.”

Other Social media users questioned If Mr Lammy was fit to be an MP at all, a user by the name of LM wrote: “In announcing your participation in Civil Disobedience you have just illustrated why you are not fit to be an MP.

David Lammy, on the streets with a mob attempting to bring down the government; now that would be a site to behold.