The Extinction Rebellion group disrupted the city’s public transport network. Transport for London disabled wifi on the underground at the request of the British Transport Police.

Thousands of people, mainly teenagers and young adults, have been taking part in the civil disobedience protests since Monday, blockading four landmarks in the capital in an attempt to force the government to take action on the "escalating climate crisis."

On Wednesday morning, the four sites – Marble Arch, Waterloo Bridge, Parliament Square and Oxford Circus – remained under the control of protesters, causing delays and diversions in the surrounding areas.

A TFL spokesperson said. “Customer wifi in underground stations has been temporarily switched off. We will restore access as soon as we are able to do so.”

Passengers were not informed about the decision to turn off the network, and many travellers wrongly attributed the disruption to conventional technical faults. Disabling public communications networks is an increasingly common tactic used in policing disruption across the world.

At least 168 arrests were made on Tuesday, the Metropolitan police said, bringing the total of Extinction Rebellion-related detentions since Monday up to 290. 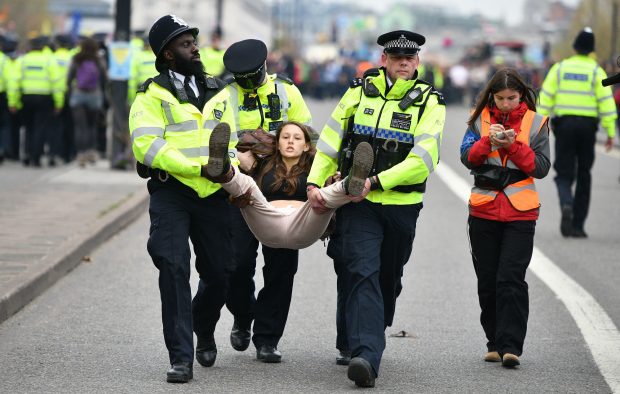 Organisers said demonstrations had taken place or were planned in 80 cities across 33 countries – from India to Australia, and around Europe and the US. In Scotland, more than 1,000 protesters blockaded the North Bridge in Edinburgh, bringing one of the main routes into the city centre to a standstill. Police said they made 29 arrests.

Nearby, police moved on to Waterloo Bridge to begin a second wave of arrests as hundreds of protesters continued their blockade.

Some of those on the bridge had been locked or glued to a lorry parked across the carriageway since Monday night.

Many protesters said they were willing to remain at the junction throughout the night in order to hold the space.

Elmo MB, 20, was manning a wellbeing tent. He said he was not worried about the police order to leave the area. “I think breaking the law is the point,” he said.
-->