EU elections Today: Get out the Vote

As a Party that has long been committed to coming out of the EU, the English Democrats are naturally reluctant to get involved in another round of EU elections.  However, on reflection there is a benefit for the case which we are fighting for a Declaration from the High Court, declaring that UK has already left the EU as of the 29th March 2019.

SURELY IT IS TIME TO SHOW THE EU FASCISTS THAT WE ENGLISH DO NOT BREAK THAT EASY!

These elections are therefore a one-shot opportunity for us to break the media blackout and get the news of the case directly to every voter. We MUST not let this amazing opportunity pass us by because we can't raise the funds, that would be a tragedy and a victory for Corbyn , May and the other Westminster anti Brexit fascists! 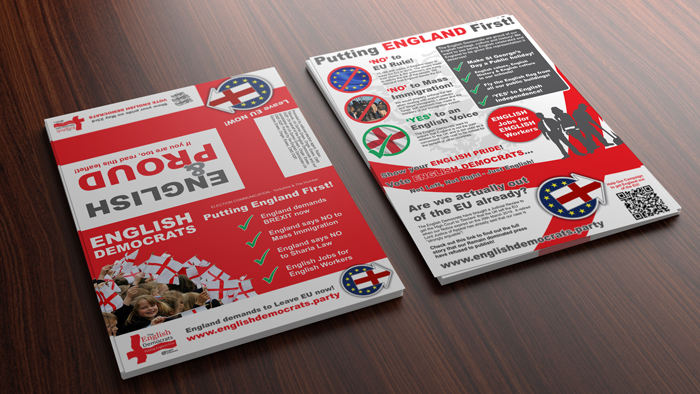 ALL DEMOCRATS MUST DEFEND BREXIT SO WE SHALL STAND!

The Remainers in the media clearly do not want the public to know about the only realistic chance of getting us out of the EU!  So, by standing in the EU elections we can further push the BREXIT agenda!

The more people that know about the case the more we may be able to raise in order to ensure that we can match the huge spending of both the taxpayer funded Government lawyers and of the big business funded Remainer groups.

Also, it will help to open peoples’ eyes to how biased and unreliable the ‘Fake News’ from the mainstream media actually is! You already know this, but others don’t, so c’mon...  Help us now and let's start FIGHTING BACK!