A criminal gang who beat, robbed and then used a doctor's stolen debit cards to buy thousands of pounds worth of euros and sports clothes have been jailed.

Ibrahim Ahmed, 27, Anis Said, 26 and Abdullah Mohamed, 27, blew the victim's cash just hours after he had been hospitalised for the attack which occurred in the city's Northern Quarter. 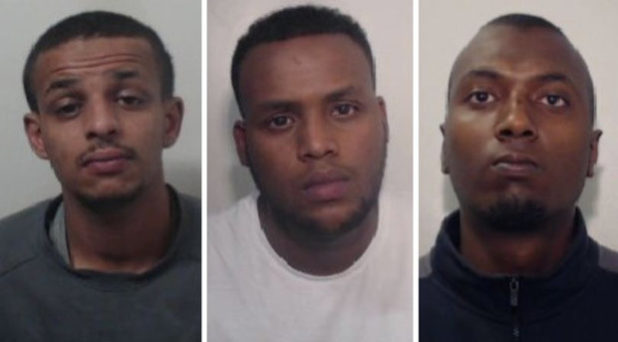 Manchester Crown Court heard that the victim, who worked as a locum doctor, had been on a night out with friends when he became heavily intoxicated.

During the course of the evening, he became separated from his friends and was befriended by a group of males, the court heard.

At some stage, the man went to a nearby convenience with the group of men and withdrew a sum of money, prosecutor, Jane Greenhalgh said.

"He recalls at some point the group becoming hostile and he was attacked," Ms Greenhalgh told the court.

"He remembered being kicked and stamped on whilst on the floor."

The victim also told police he believed he had been driven somewhere by the group - but due to his intoxication, could not remember how or where.

After escaping from the men, he attended at hospital and was treated for a fractured collar bone and bruising to his cheeks.

He later noticed that his phone, E-cigarette and debit card had been stolen from him.

The following morning, Ibrahim Ahmed was seen on CCTV at the Bureau de change at Marks and Spencer on Market Street.

There he withdrew £1,998 worth of euros, telling staff that he had planned a trip to Amsterdam with his family to 'get high' and asked them about their buy-back rates.

This aroused suspicion and the staff filed a suspicious activity report, notifying police.

A short time later, Mohamed and Said were seen at a JD Sports in Denton where they purchased over £700 of sports clothing and footwear, Ms Greenhalgh said.

"A local police officer was asked to view the CCTV and identified both the defendants from the footage," she told the court.

"The officer had known both defendants for many years and was able to pick them out."

The original story makes no mention of their immigration status (shocking, isn't it?) Even if they are immigrants, I doubt we'll be seeing them given their marching orders.