New Lib Dems leader Jo Swinson pulled no punches saying on Twitter that “Jeremy Corbyn didn’t fight to remain in 2016, and he won’t fight for remain now. He wants to deliver a Labour Brexit because he is a Brexiteer.” 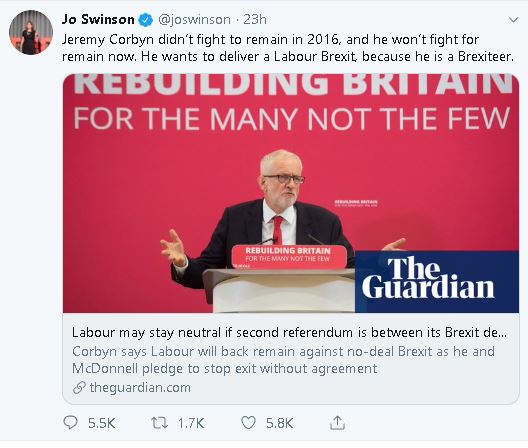 Rumours have swirled around Westminster in recent weeks regarding a potential ‘Unity government. These rumours followed several remain alliances in recent by-elections which resulted in victories for Labour and the Lib Dem’s. However, it would appear that friendly fire may now be occurring.

A book released by Tom Bower in 2018 which is highly critical of Mr Corbyn states with little ambiguity that Mr Corbyn has been throughout his career ideologically against the EU. Mr Bower states that “Both Corbyn and McDonnell wanted to campaign for Britain to leave”.
It is becoming increasingly difficult to see a scenario in which Mr Corbyn would be able to draw support for him to be the PM of a unity government.
In spite all of this Mr Corbyn is adamant that “In a general election, we will put forward the opportunity for people in this country to have the final say,” he said on Monday. “It is not a rerun of 2016. It is simply saying the people of this country should make the final decision.”
As a result of the Labour Party membership being decisively pro-remain. Jeremy Corbyn‘s own position in the Labour Party is far from secure.
Trouble in paradise already? This coalition will be a comedic circus. Just sit back and watch the fireworks!
-->