Loudmouth Labour David Lammy MP has shared song lyrics describing the “shame” of being a white male, and the “evil” of their “ancestry”.

“The patriarchy is real, the proof is here in my song. I’ll sit and mansplain every detail of the things it does wrong
‘Cause I’m a white male, full of shame
My ancestry is evil, and their evil is still not gone”

The Labour MP, who was born in London to Guyanese migrants, capped the excerpt with an emoji of a black fist punching to the right. 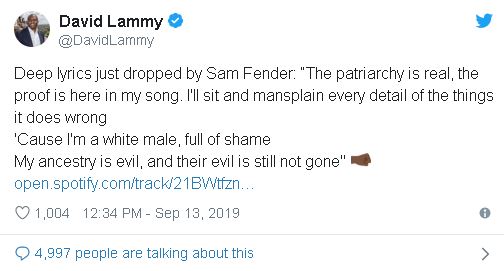 Lammy’s seeming endorsement of the song’s sentiments was challenged by BBC interrogator-in-chief Andrew Neil — one of the few senior journalists at the publicly-funded broadcaster with a background in right-leaning journalism — asking: “So let me get this right, David: all white people have an evil ancestry and, as a consequence, are still evil?”

Lammy did not respond to Neil directly, but the lyrics received a defence of sorts from Jonathan Lis of British Influence, an anti-Brexit pressure group once spearheaded by Peter Mandelson and Ken Clarke, who suggested that “The lyric presumably refers to the evil of white supremacy which produced the slave trade and colonialism and is alive and well to this day.”

“So where do white people enslave others today? And in the past were white supremicists [sic] the only enslavers and colonisers?” Neil replied.

In fact, the British Empire played a key role in ending Atlantic slave trade, abolishing it not just domestically but arming a Royal Navy squadron to put a stop to it internationally, at signifcant cost in both money and lives.

Britain also played a key role in putting down the centuries-old North African slave trade in European Christians — including Britons who were captured both at sea and in raids on the British coast — and in curbing the extensive but little-remarked predations of Arab slavers in East Africa.

Lammy being the race-baiting liberal that he is, will, of course, never admit to this!