A lost monastery founded by an Anglo-Saxon princess may have been rediscovered.

Æbbe (AD 615-668) was the daughter of King Æthelfrith, ruler of the Anglo-Saxon kingdom of Bernicia, which encompassed most of what is now south-eastern Scotland and north-eastern England. Historical sources attest that she converted to Christianity and established a monastery near Coldingham. Shortly after her death in AD 668, the religious centre burnt down, but it was subsequently rebuilt and continued to thrive until it was destroyed by Viking raiders in AD 870. After this, the site was abandoned.

Previous searches for the monastery had concentrated on the headland near St Abbs – named after Æbbe herself – but all investigations had come up dry. This led archaeologists from DigVentures to begin a new search further inland by crowdfunding an excavation closer to where Coldingham Priory, a later medieval Benedictine religious house, is located. 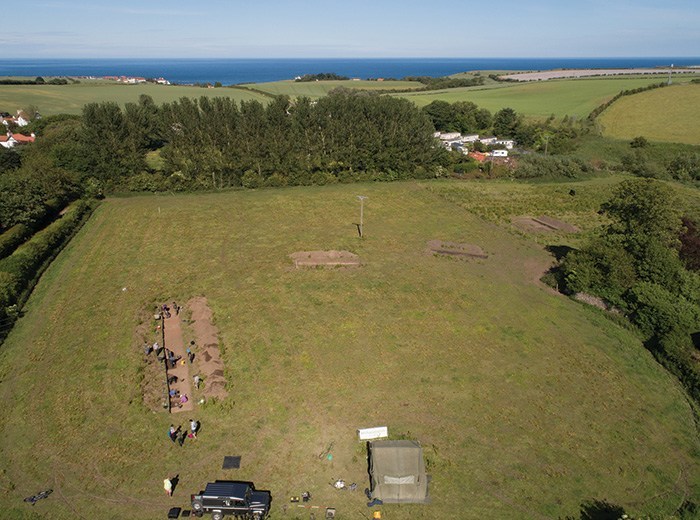 Geophysical survey conducted around the priory found several intriguing features as well as some small finds from the Anglo- Saxon period, including a belt fitting and pieces of sculpture. As it was not possible to dig the entire survey site, the team concentrated on four trench locations that they felt would yield the best results – and, luckily, they chose correctly.

The excavation, led by DigVentures with support from the National Lottery Heritage Fund and Friends of Coldingham Priory, found traces of an expansive but narrow circular ditch, which the team believes is likely to be the ‘vallum’, or the boundary surrounding the monastic settlement. They also uncovered a large pile of butchered animal bones that were radiocarbon-dated to AD 660-860, squarely within the tenure of Æbbe’s monastery.

‘It is brilliant to finally be able to announce that we’ve found Æbbe’s monastery, and to confirm that part of it is probably underneath Coldingham Priory,’ said Manda Forster from DigVentures.

‘Æbbe is an extraordinary figure – an example of a powerful Anglo-Saxon woman who played a big part in establishing Christianity in the region during the 7th century. Now that we’ve got evidence to pinpoint exactly where her monastery was, we can help bring her story back to life.’