May MUST END Brexit talks with Corbyn

According to a large Express.co.uk poll, voters want Brexit talks between Theresa May’s Government and the Labour Party to end as soon as possible.

An overwhelming majority of voters in the poll, urged the Prime Minister to stop looking for a compromise with Labour leader Jeremy Corbyn on Brexit. The survey, which took place between April 30 and May 1, revealed an astonishing 94 percent of voters (6,692 people) answered ‘yes’ when asked whether Mrs May should walk away from the Brexit negotiations with the Labour leader.

Out of a total of 7,126 voters, only five percent (358 people) believed Mrs May should continue to try and find a solution to the Brexit deadlock, while one percent (76 people) of those polled said they didn’t know what the Prime Minister should do.

Mrs May entered her fifth week of cross-party Brexit talks with Labour leader Jeremy Corbyn this week in a bid to forge a consensus to help get a Brexit deal though Parliament after her withdrawal agreement was rejected by MPs three times.

A spokesman admitted on Monday Mrs May and Mr Corbyn still have to find “a way forward” on how to reach a compromise on Brexit. 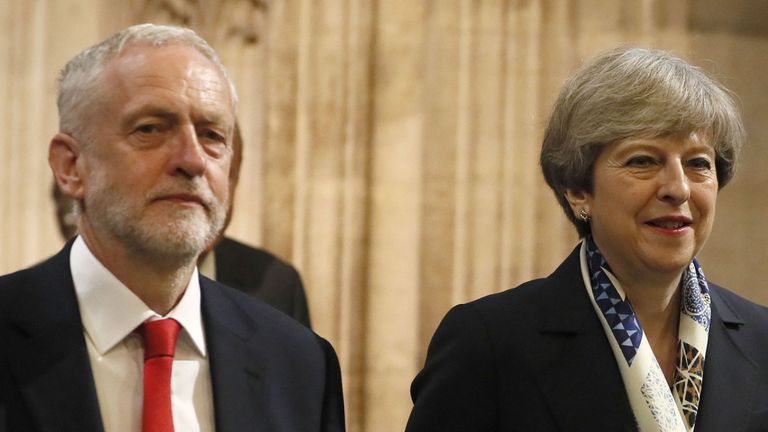 Foreign Secretary Jeremy Hunt warned the Prime Minister against striking a deal with Labour as it would alienate Tory MPs.

He told the Daily Telegraph: “There is always a danger of doing a deal with Labour that means you lose more Conservative MPs than you gain Labour MPs, but I think the essential question is whether Labour are serious about delivering Brexit.”

Mr Hunt also told BBC Radio 4’s Today programme: “If we were proposing, which I very much hope we don’t, to sign up to the customs union, then I think there is a risk that you would lose more Conservative MPs than you would gain Labour MPs.

“If, on the other hand, it was something different, then the result could be different as well.”

But Environment Secretary Michael Gove spoke in favour of continuing the talks with the Labour Party.

In a speech which led Brexiteers to think the Prime Minister may be ready to bow to Mr Corbyn’s demands, Mr Gove told ministers it would be better to have the “unpalatable” outcome of a deal with Labour rather than the “disastrous” outcome of no Brexit at all.