In another spectacular find a team of more than 40 archaeological experts – including conservators, finds specialists, ancient timber specialists, and engineers have produced revolutionary new insights into the lavishly furnished wooden chamber and the man buried there.

The Prittlewell chamber, with its lavish grave goods, was clearly a burial space. What could we learn about the individual who was interred within its walls? The first clues came from a series of iron fittings that picked out a rectangular outline on the chamber floor. Together, they appeared to represent some sort of support or container for the body of the deceased. 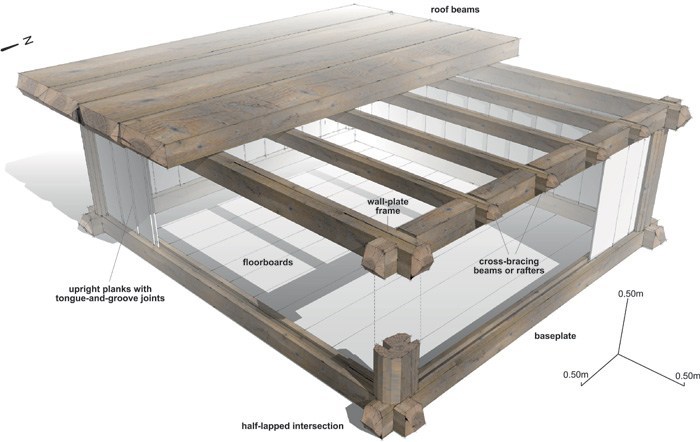 In fact, closer examination revealed the fittings to be L-shaped angle brackets that would have reinforced the lid and corners of a wooden coffin. Study of the outline of the coffin, together with mineral-preserved wood on the metal fittings and soil stains indicating planks from the lid, enabled the team to reconstruct an exceptionally large ash-wood coffin with an elaborate lid.

The coffin would have measured some 2.25m by 0.85m by about 0.5m high, and would have weighed around 160kg – its size and the use of iron fittings reflect the importance of the person placed inside.

The timber planks would have been joined together with wooden pegs, and certain elements reinforced with the iron angle brackets, and again its construction was a mighty task – from finding and felling the trees to preparing the boards and making the coffin represents perhaps 8-13 person-days’ work. 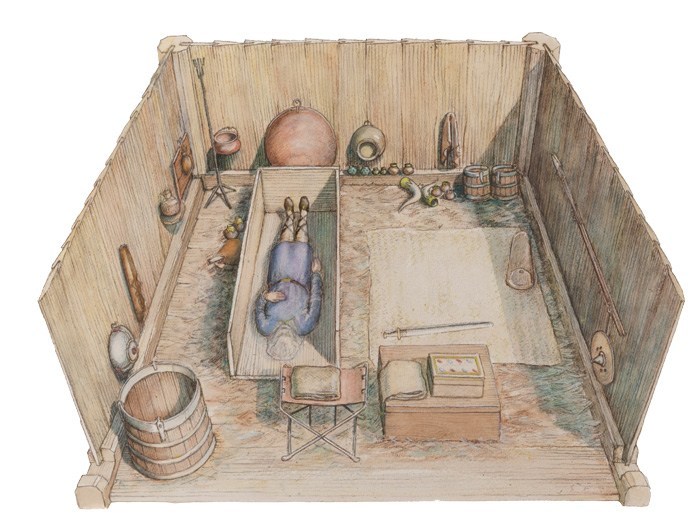 Iron coffin-fittings are rare for the early Anglo-Saxon period, but coffins with angle brackets are known from contemporary burials in Kent and the Merovingian Frankish kingdoms in present-day France and neighbouring countries.

No trace of a skeleton survived within the area of the coffin, but after the excavation was completed, while sorting flotation residue from an environmental sample taken from the west end of the coffin, the team discovered tiny fragmented pieces of human tooth enamel, confirming that a body had once been laid there.

These included pieces of permanent molars, meaning that the individual must have been more than six years old at the time of their death.

Unfortunately, the decayed elements of the collapsed coffin lid and the body it once covered had been reduced to a dark organic stain compressed into little more than 25mm of soil, making it impossible to discern a soil silhouette of the body as is sometimes found.