A private civic memorial service has been held at St Ann’s church to remember the victims of the Manchester Arena bombing. The families of those killed, people who were injured, and representatives from first responders were all in attendance.

Manchester Cathedral is open throughout the day for people to "spend some time in quiet reflection and prayer.

People lit candles and spent time remembering those who died, those are still suffering physically and mentally and everyone affected by the attack.

Ariana Grande has paid tribute to the victims of the Manchester Arena bombing on Instagram to mark two years since the atrocity took place. 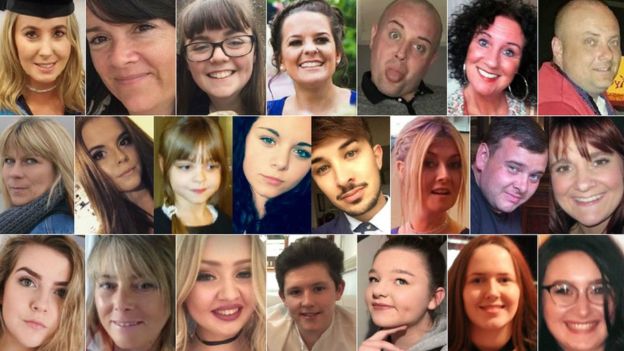 The singer had just finished a show at Manchester Arena in May 2017 when Islamist suicide bomber Salman Abedi detonated a device in the arena, killing 22 people and injuring more than 100 others.

The family of Lee Rigby has said that 'the more time passes, the more they miss him' on the sixth anniversary of his death.

In the unprovoked attack in 2013 outside Woolwich Barracks, which sent shockwaves around the world, Michael Adebolajo and Michael Adebowale mowed down the 25-year-old in a purple Vauxhall Tigra.

He was then hacked at with knives and a meat cleaver, almost beheading him.

In a Facebook post the family said: "Today is a day we all dread as a family.

"It's exactly six years since Lee was murdered and it never gets any easier. The more time passes, the more we miss him because it's been so long since we last heard his laughter, saw his smiling face or felt his arms wrapped around us."

The family continue: "But as heartbreaking as it is, we are trying to keep Lee's legacy alive so we can remember him with all our love not just today, but every day of the year.

"As a family we will come together to comfort each other and keep Lee close to us.

"But we would like to say a huge thank you to the thousands of people who continue to support and help us on our journey."