Mohammed Khan, from Smethwick in the West Midlands, subjected his 21-year-old victim to regular beatings and sexual attacks over an 18-month period.

On one occasion he pinned her by the throat against a wardrobe and on another he chipped several of her teeth after punching her in the face as they sat in his car.

Last April he orally raped her following a violent argument.

A court heard he even forced her to watch hardline Islamic instructional videos teaching her how to behave.

She was saved when her family alerted police last year after becoming concerned about her behaviour and change in appearance.

After several months, she finally plucked up the courage to press charges and Khan was arrested.

Following a trial at Wolverhampton Crown Court he was found guilty of rape and two counts of coercive control. Khan, 23, was cleared of three other rape charges.

Last Thursday he was jailed for 12 years and ordered to sign the Sex Offenders' Register for life.

Speaking after the trial, Detective Inspector Cate Webb-Jones from the West Midlands Police Public Protection Unit, said: 'This young woman completely changed her behaviour in order to please Khan; she missed exams, lied about her injuries and stopped wearing make-up. 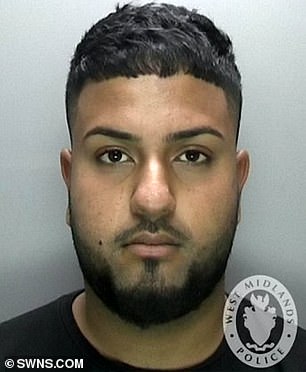 'Fortunately family members spotted these signs and reported it to the police.

'Part of Khan's abuse was teaching her she couldn't say "no" to him; he warned that if she did he'd go elsewhere for his gratification.

'And such was the control he had over her, she stayed with him and said she still loved him despite the fact he subjected her to awful physical and sexual violence.

'In interview, the woman also told our officers that she was made to watch Islamic faith videos as it would make her a better partner.'

Det Insp Webb-Jones added: 'This is one of the worst cases of coercive control we have seen and I'm pleased that a dangerous offender - one that presents a clear threat to women - has been jailed for a long time.

'It also sends out a strong message that such abhorrent behaviour is totally unacceptable and that offenders risk many years behind bars.

'We would encourage anyone who notices similar changes in behaviour in family or friends to report them or refer them to Women's Aid.

'We have specialist officers who deal with domestic offences who can protect victims offer practical help.'

The court heard specialist officers from the force's Public Protection Unit worked with Black Country Women's Aid to help the woman after they were alerted.

Last April she plucked up the courage to submit a formal police complaint against Khan and he was arrested.