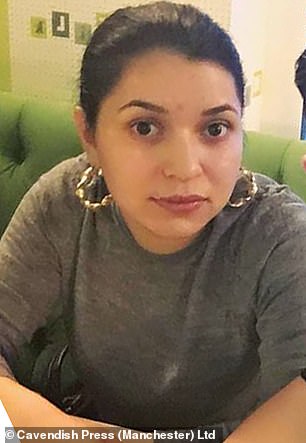 Madalina Horvath travelled to England in 2015 when she was just 16 so she could steal more than £15,000 worth of consumer goods from stores in a spree that hit cities including Cambridge and Manchester.

The 19-year-old was jailed up for 14 months after she admitted five charges of theft this month, but a judge has now ruled she is to be released if she returns to Romania.

The teenager was first arrested in Kent, granted bail and told to attend court - only to disappear and go on another thieving expedition.

She was rearrested in November last year with accomplices at the Trafford Centre mall after the group stole thousands of pounds worth of items from John Lewis.

Earlier this month she was jailed, only to be brought back to court this week to have her sentence quashed.

Judge Bernard Lever allowed her to return home immediately when she presented him with a one-way ticket back to Romania.

Judge Lever slammed the practice of 'professional gangs of shoplifters' coming here to 'interfere with the lawful commerce of shops in this country'.

He said. 'We are very welcoming of foreigners in this country and you will not be treated any differently because you are from Romania. However all we ask is that people simply abide by the law."

'The fact is you went on a professional shoplifting spree and you were at the epicentre at the planning of it - £3000 in this town £2000 in that town, going round the country. Whilst on the run you still stole thousands of pounds worth of goods here in Greater Manchester before you were caught and remanded in custody' he added.

Horvath thanked the judge as she walked free.