Together we can Make England Great Again

TOGETHER WE CAN MAKE ENGLAND GREAT AGAIN!

By the year 2050, in a mere 31 years, the English will be (according to many projections) a minority in England, our own country! However, these projections forgot one thing…WE SHALL STRIVE UNCEASINGLY TO PROTECT OUR CHILDREN'S FUTURE AND OUR LAND NO MATTER THE COST!

Between 2004 and now, the immigrant population in England grew at an alarming rate, making ‘new comers’ a large percentage of the population with around 14 MILLION now resident here.  Many of these identify as being British, not English.

England, until the 1950s, could trace its ancestry back thousands of years.

In 1903, in Cheddar Gorge, Somerset, the remains of a prehistoric man were found.

Known as Cheddar Man, DNA tests on this almost 9,000 years old skeleton showed that he has living descendants today, still in the local area! The long stretch for England’s identity is now coming to an end, yet the political class refuse publicly to discuss the mere notion of simply being ENGLISH!

We have no issue with these people we need coming to work nor with those who embrace our English culture, laws and traditions but sadly the poorly thought out immigration policies of successive British governments over the last 20 years has led to massive and unwelcome social change and community tensions that are neither fair to the indigenous English or to the newcomers. As usual, the British political elites create the problems that we the ordinary people are left to deal with! 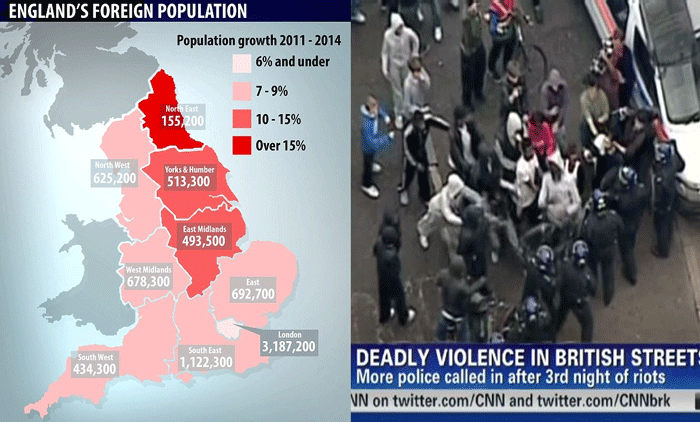 We all know that this country has serious problems in this regard but very few in Westminster dare say a word let alone even try to fix them!

Why the silence from the politicians? I will tell you:  They don’t want the English to do anything about it!  The ancient Greek leader, Pericles, once said: " Just because you do not take an interest in politics doesn't mean politics won't take an interest in you." So, if your strategy is to sit back and "do nothing", then I'm afraid you are only postponing the inevitable and making things worse for yourself.... you cannot hide from the impending disaster!

Unfortunately, whether it is 5 years, 10 years, or 20 years’ time, you WILL have to do something about the state of our country! The catch is: the longer you leave it, the more difficult it will be to fix!

The only possible and realistic option for all English patriots is to join the English Democrats Party to fight for a voice for us, the English. Look at Scotland, Wales and Northern Ireland, they ALL have their own legislative assemblies and parliaments so why should we ENGLISH be treated differently? All we want is “A FAIR DEAL FOR THE ENGLISH” and you can help us secure this by JOINING the Party!

We now enjoy a support base of thousands of English patriots nationwide, so you will not be alone in doing something effective to save your country.

To join The English Democrats costs £15 per year for concessions and £32 for standard membership so please click on the following button:

What's in it for you?

Actually "making the leap" and joining a well-established ENGLISH Nationalist party may be a liberating experience but the main reason should be… it is the RIGHT thing to do!

We all feel pride doing something constructive to help the situation and you will find new friends and a new family among the legions of patriots just like you who love England and are fed up being second class citizens in our ancient homeland.

I would like to thank you in advance for your continued support and I look forward to welcoming you on board.

PS: If you cannot join, for whatever reason, and that is fine, but please consider giving a one-off donation towards our campaign to save BREXIT via our legal challenge. Donate below:

On the 21st October 1805 Vice-Admiral Lord Horatio Nelson, aboard the HMS Victory, issued the signal “England Expects That Every Man Will Do His Duty”