As Patriotic Englishmen and women, we welcome Trump's comments, but where the hell are our own politicians on this?

U.S. President Donald Trump has fired off another salvo at British critic Sadiq Khan, the Mayor of London, saying the city will “never have safe streets” under his “incompetent” leadership.

President Trump issued his latest denunciation of Mayor Khan, who recently signed a letter by the George Soros-funded HOPE Not Hate group accusing the American leader of “unashamed racism”, in a Twitter post responding to Britain’s Katie Hopkins, the former LBC radio host and MailOnline columnist. 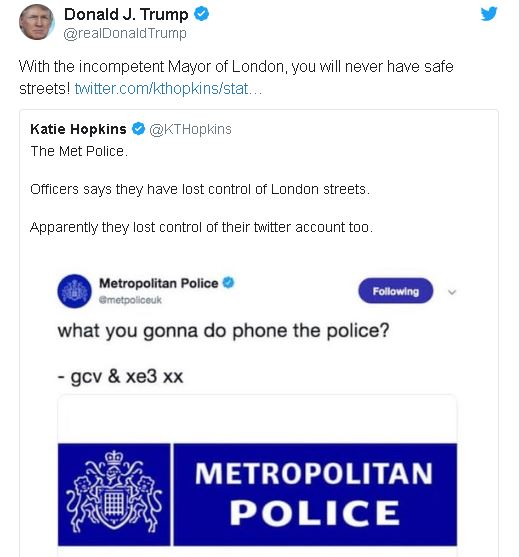 Hackers had used the account of Britain’s leading police force to post a series of bizarre messages late on July 19th, such as “F*** THE POLICE FREE DA GANG!!”, “FREE DIGGA D ON FONEM GANG”, “We are the police… -Cal and dylan are gay btw”, and branding police officers “pigs” and “c**ts”.

The Metropolitan Police later confirmed that “unauthorised content was sent out on Twitter and via email as well as appearing on the [MyNewsDesk] news site”.

While the Met was temporarily forced to use its alternative @MPSOnTheStreet account, officers insisted there had been “no compromise of the Met Police’s IT network” — and that they were “working closely with Mynewsdesk and specialist Met cyber-crime investigators to fully understand what has occurred and if there are criminal offences.”

President Trump also retweeted a post by Hopkins saying she wished the United Kingdom enjoyed the same leadership offered by his administration, in specific reference to his recent spat with a group of far-left ethnic minority Congresswomen known collectively as “The Squad”.

He then quoted another tweet from the British commentator suggesting that “Don’t love it? Leave it!”  should be his campaign slogan for 2020, and that “Send her back is the new lock her up”, alongside footage of Trump supporters chanting the former about “Squad” member Ilhan Omar, who is originally from Somalia.

“As you can see, I did nothing to lead people on, nor was I particularly happy with their chant,” Trump remarked.

” Just a very big and patriotic crowd. They love the USA!”

London is now a Third World City. As English people leave for pastures new, and mass immigration continues, this trend will accelerate, and in ten years, there will be very few English people living there.