Will you stand with Soldier "F"?

Will you stand with 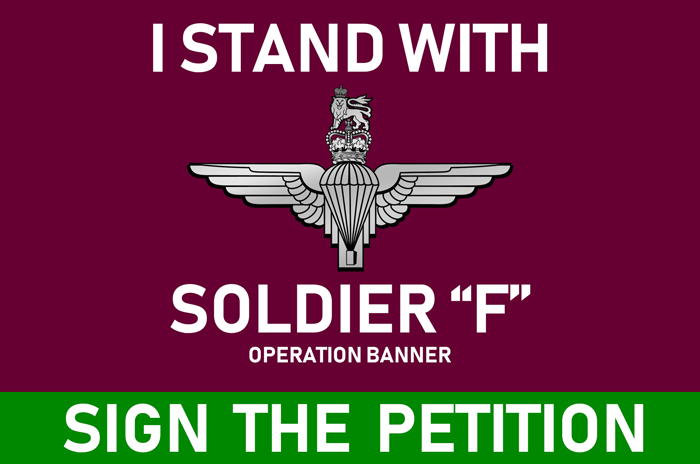 Our cowardly establishment have thrown our soldiers under the bus... ONCE AGAIN!

As the media has reported, Outgoing Prime Minister May personally intervened to block amnesty for former soldiers that served in Northern Ireland. The terrorists now sit in government while the possibility of jail time hangs over the heads of men like soldier “F”.

Soldier “F”, an elderly veteran, whose only crime was wearing a uniform and fighting those who sought the destruction of our nation, is now being dragged into court, hounded by the media, and will surely be found guilty by our corrupt judiciary.

The terrorists must be laughing at us!

Only through people power can we bring this national disgrace to a halt. Help defend Soldier “F” by sharing this National Petition to all your friends and family on social media. Let’s show the establishment that the nation stands behind our Soldier “F” while the political elite bends over backwards to appease the terrorists.

They defended us, now it is time we defended them!

If you have already signed our national petition, please share on your facebook to reach others who wish to express their support!